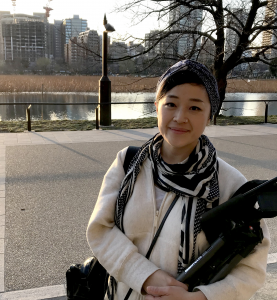 Vivian Wenli Lin received her Ph.D. in Media Art at the City University of Hong Kong’s School of Creative Media. In 2017, her doctoral research was presented in the form of an exhibition titled, Visualizing the Voices of Migrant Women Workers at the University of Hong Kong with support from the Interdisciplinary Knowledge Exchange (KE) Project Fund.

In 2004, she received a Masters in Fine Arts from the Sandberg Instituut in Amsterdam, The Netherlands where she co-founded Voices of Women Media in 2007, an organization that offers multimedia workshops to marginalized communities of migrant women – including teenage girls, asylum seekers, victims of human trafficking, and women in the emotional labor industry.

Vivian’s prior education includes a Bachelor of Arts in Psychology and Asian American Studies from the University of California at Berkeley. In addition, she received a Masters in Professional Studies at New York University’s Interactive Telecommunications Program where she co-founded alongside Ann Poochareon and Geraldine Chung, Fortunes for Cookies, a self-portrait video workshop for young women from the Chinatowns of New York City.

Vivian has diverse experience in media education. From 2007-2014, she taught One Minute Junior video art workshops and Training for Trainers workshops for UNICEF and The One Minutes Foundation throughout Europe, Asia, Africa, and America.

From 2017-2021 she was based in Tokyo, Japan, where she taught at the Tokyo University of Foreign Studies and served as an Associate Professor at Tokyo Christian Woman’s University.

From 2020-2023, Vivian is appointed the Visiting Assistant Professor in Media for Social Change, Department of Media Arts and Culture at Occidental College in Los Angeles, CA.